Smartphones are pocket-sized all-rounders that have made many devices obsolete. Camera, GPS and media-players are often forgotten, stashed away somewhere deep in the closet. Thee LED light that was intended for the camera flash, soon received a second purpose as flashlight. A big hit, because you need a light more often than you'd expect. The question is this: does the flashlight on your smartphone make the keychain flashlight obsolete? In this test, I will compare the Samsung S series and the Fenix E02R!

As far as I know, this is the smallest Fenix light I've ever held in my hands. And yet so remarkable! The E02R is rechargeable with the micro-USB port that is 'hidden' below the head of the light: after you're done charging, you twist the top back on, and the port will disappear behind the O-ring! As such, the light is protected according to the IP68 norm and is entirely waterproof. The light provides a maximum output of 200 lumens, which has a far and wide reach thanks to the specially designed reflector. Available in three colours and for an affordable price!

The E02R and daily use

The E02R is very small, so you'll have to give it a fixed position in your gear not to lose it. For example, on your keychain, on your backpack or bag, or in the little coin pocket of your pants. With lights like these, you barely notice you're carrying them. Charging is very easy and self-explanatory with the red/green indicator light. The light is equipped with 'twist control': simply turn the head for the lowest setting, and a quarter turn further for the highest setting. That's it: it doesn't get any easier than that! Great advantage of this feature: the light will never accidentally turn itself on in your pocket. One small disadvantage: operating it with one hand is a bit difficult.

Enough about the E02R alone; the issue at hand is whether this light adds anything to your daily gear! When you place both LEDs and casings next to each other, you notice a clear difference. Samsung's LED does not have a reflector, and is clearly designed to produce stray light, meant as a flash for the camera or to provide some light when you're taking a video. Pretty soon, the flash for the camera was given an additional function of flashlight, and that function is now indispensable. The E02R has a real lens with reflector, meant to spread and lengthen the reach of the beam.

In terms of options, Samsung is the winner. The smartphone has 5 light modes, while the E02R only has the low and high mode. By downloading apps, you can even 'pimp' your light; this is not possible for the E02R. When it comes to light output, the E02R is clearly superior. No wonder, since it's obviously bigger and it's equipped with a lens and reflector. The E02R has a maximum output of 200 lumens; that's a lot for such a little light! Samsung does not provide the exact parameters of the LED they use, but (after some research) we can assume the lowest setting to be 10 lumens and the highest setting to be 50 lumens. As such, the E02R provides four times as much light. The average battery time of a smartphone (with average use) is about 1 to 2 days. In theory, if you're only using your smartphone for the flashlight and no other apps, you could use the light for at least a day. The E02R's battery is nowhere near that time-span: at the highest mode, it will only last for 20 minutes, but with the low mode it could last about half a day.

In terms of user-friendliness, I prefer the E02R. You can quickly turn it on or off with the 'twist control': a quarter turn further will give you the highest mode. This takes a lot longer with the Samsung: first you need to unlock the phone, then swipe down and possible adjust the brightness. Of course, it will take less than a minute, but if you need a light quickly, the E02R is still faster. The E02R is also better for hands-free use; you can easily hold it in your mouth to keep both your hands free. This is much more difficult with a smartphone...

Time to get practical! In the pictures below I demonstrate the difference by showing common situations. In order not to make the comparison too long, I will show the lowest and highest light modes of the Samsung and the E02R.

Let's begin indoors, in this case, in a garage. The first thing you'll notice is the warmer shade of light from Samsung, and the broader light beam that clearly has less reach. Both the E02R and the smartphone provide sufficient light.

The next location is an unclear path with willow trees. The low light mode falls short for both lights. With the high mode, the smartphone only lights up the first few meters, but the E02R provides a clear view at a larger distance.

The last location is a young forest. Here, the difference in range becomes obvious. The E02R is clearly the winner, both with the low and the high modes.

Once again, the same location with the Samsung Galaxy S10 and the E02R in hand. Look at how many trees are illuminated.

Within the comfort of your own house, the flashlight on your smartphone will usually suffice. The low mode is nice to read with, and you can use 50 lumens when you need a bit more light. Indoors, you won't really notice the lack of range. Outdoors, you'll notice that the flashlight of your smartphone quickly falls short because you only have a few meters of range. It works fine to find the key-hole of your door or to find the keys you dropped, but they're less suitable to use for unlit trails through the woods or dark alleys. Certainly for outdoor use, I recommend the E02R, also because of its great user-friendliness. For such an amazing price, why wouldn't you? 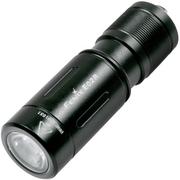 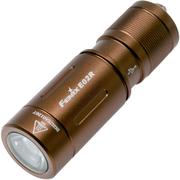