The Petzl Poche Tikka2 is a handy sheath to safely store your Petzl head torch. It is made of semi-hard material, so it can withstand almost anything life throws at it. The zip is nice and sturdy, and there is a belt loop at the back so you can hang the sheath from your belt. There is also a reinforced eyelet that you can use to hang the Poche on a carabiner or climbing rope.

The interior of the Poche is finished with a soft fabric, which limits the risk of scratches. A storage compartment on the inside can fit a Petzl Core battery or three AAA batteries.

Which head torches fit in the Petzl Poche Tikka2? 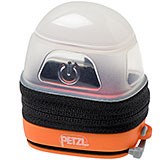