With the Powertraveller HARRIER 25 you have a wide range of charging options. This portable power bank is wireless. Specifically designed to wirelessly charge your smartphone with Qi functions. But this charger can also charge other USB-rechargeable devices such as flashlights. The elastic band ensures that the device you charge stays in place during transport. Very practical!

The Powertraveller HARRIER 25 charges all USB-rechargeable devices. If the flashlight has a maximum diameter of 23 mm, you can also easily secure it underneath the elastic band. Is your flashlight too big? No problem at all! You can simply place your flashlight next to the charger.

Press the power button on the side to activate the charger. As soon as you turn it on the power bank will show you four white and one blue LED light. The blue LED tells you that the charger is ready for use. The white LED lights show you the current power level

Strength of the Powertraveller HARRIER 25

The entire battery is finished with a rubber layer. As such the power bank is protected from blows. The entire finish was designed as such that it is water and dust proof. The Powertraveller HARRIER 25 is enhanced with a clever detection technology. As soon as you no longer need the charger, it will turn itself off.

With a power of 6700mAh you have enough power to charge your flashlight 5 to 9 times. The Powertraveller HARRIER 25 will completely charge a smartphone two to three times. This is more than enough.

If you want to charge the power bank you can use the included USB-C charging cable. The white LED lights will show you the actual charging status. As soon as all four LED lights are burning the power bank will be completely charged.

Qualities of the Powertraveller HARRIER 25 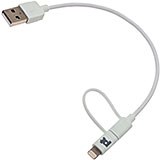 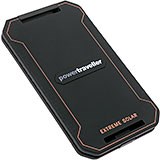 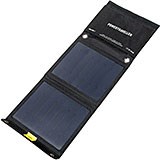