Grailer in the German Messer Magazin

We already knew that our Grailer knives were awesome, but now Germany is also convinced! In the famous Messer Magazin, the largest knife magazine in Germany, a four page article was published discussing the Grailer 1

Knife journalist Stefan Schmalhaus tested the Grailer 1 a couple of months. He used the model with the titanium handle, and the version with the Spalted Beech inlays. We already kind of hoped for this outcome, but the results are almost undividedly positive!

The designer of the Grailer 1, Dirk de Wit, already has a number of loyal fans in Germany because of his handmade knives. The fact that this article was published in the largest knife magazine in Germany proves once again that he is still popular. Especially the fact that the thumb stud can be removed to make sure the knife can be legally carried on the street is praised.

What is Messer Magazin?

Messer Magazin is a knife magazine from Germany. With a print run of 27.500 copies it is, in this category, one of the largest in Europe. You can purchase it in practically any book store or kiosk. Every other month a new edition of almost 100 pages is introduced!

Curious to learn more about the findings published in the Messer Magazin and willing to brush up your German? Order the fifth edition of the 2018 Messer Magazin here!

Germany is convinced, now it is time for the rest of the world to fall in love with the Grailer 1. Who’s next? 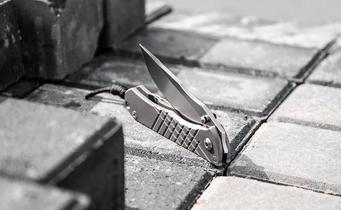