Handmade top-quality Japanese knives that also look amazing: those are the knives from the Kanso Aogami collection from Eden. And they are also favourably priced! We added the stunning knives from this collection to our knife magnet for a line-up.

The word 'kanso' is Japanese for simplicity. This was also the starting point when making this collection. The goal was to produce a knife that is amazing to use for an, as low as possible price, without compromises. And they were definitely succesful with the Kanso Aogami collection! You can also find beauty in this simplicity. These knives namely have a stunning minimalist look and feel.

The word 'aogami' in the name Kanso Aogmi refers to the type of steel used to produce these knives. Aogami means blue paper in Japanese. That is also why this steel is called Blue Paper Steel. It owes its name to the packaging in which the manufacturer delivers the steel. Characterizing for this type of steel is that it is very hard, 62-63 HRC. As such you can sharpen the knife really sharp. Blue paper Steel is sensitive to rust, and will create a [patina] (https://www.knivesandtools.com/en/ct/what-is-patina-on-a-knife.htm) in time.

The chef's knife is incredibly versatile, because you can use it to cut almost all ingredients: meat, fish and vegetables, but you can also use it for smaller cutting tasks such as peeling a clove of garlic. Because of the round belly of the blade you can use rocking movements, which is great when finely chopping herbs. The 20 cm chef's blade is perfect for daily use in your kitchen: large enough to make sure one cutting movement will suffice, but not too large to make sure you can also handle the smaller cutting tasks.

The santoku is actually the Japanese version of the chef's knife. Like the chef's knife you can use the santoku for almost every cutting task. The word 'Santoku' means: 'three qualities'. It refers to the three ingredients you can cut with this knife: meat, fish and vegetables. Compared to the chef's knife the height of the blade of the santoku is approximately the same over the entire length of the blade. Only a few centimetres from the tip the blade tapers from the spine to the edge. The cutting technique you use with a santoku is also a little different: during each movement the tip loses contact with the cutting board. You move the knife from back-top to down-front. Whether you go with a chef's knife or santoku depends on your personal preference. One is not necessarily better or worse than the other.

The kiritsuke is actually a combination between two other types of Japanese kitchen knives: the sujihiki and the nakiri. The sujihiki is a knife that is used when cutting raw fish for sushi. The nakiri is a vegetable knife. The kiritsuke from our line-up is enhanced with a double-sided grind. As such the knife is a lot easier to use than the traditional one-sided grind version. In many traditional Japanese restaurants this knife is only used by the head chef. As such the kiritsuke is also considered to be a symbol for expertise, status and seniority. But you don't have to be a chef to add our kiritsuke to your line-up!

Do you have a cutting task for which the santoku or chef's knife is too large? Take out your paring knife (also called petty). Perfect for small cutting and peeling tasks where pricision is very important, like peeling and cutting fruit. In terms of design the knife might remind you of a small chef's knife. Because of this size you will always have control over the cutting tasks you are carrying out. With a paring knife you can accurately complete any task in the kitchen.

The utility knife is a great knife for many tasks. In terms of size it falls in between a chef's knife and a paring knife. Because of the relatively long, slim blade you use the utility knife for a wide range of cutting tasks. Because of the small size it is great for the precise cutting tasks. You, for instance, use the knife to cut cheese, sausage or to finely chop herbs. 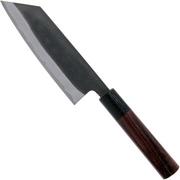 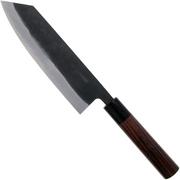 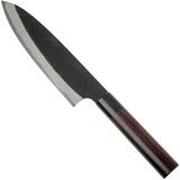 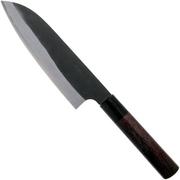 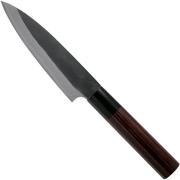 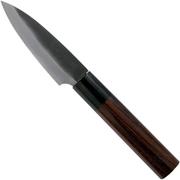 Can you handle the Kanso Aogami collection?

The knives from the Kanso Aogami collection are not for everybody. They do ask for some TLC. It is the result of the Blue Paper Steel, which is a very hard, but also vulnerable type of steel. It is, for instance, not corrosion resistant and it can break. That is why we wrote a special article about how to maintain your Kanso Aogami knives. Stick to it and you will enjoy your knives for years to come!

The advancement of AUS-10 steel

Use and maintenance of Japanse kitchen knives