We often get asked which flashlight has the best light beam. This question, however, doesn't come with an easy answer. Of course a flashlight or head torch is, first and foremost, there to give you light whenever you might need it, but for most users this won't be enough. In this topic we will tell you more about the different light images.

What is a light beam?

Initially light bulbs and HID's were often used to light up a flashlight. Today, however, brands only use LED lights. With the light source we mean the type of LED light that is used in the flashlight because each LED light is different. To work properly a LED light needs the right reflector.

The colour of the light is also important: a warmer colour is better in foggy weather because you have less reflection. The colours also look better. Cold white light is more blinding and reaches further. Below you can see five flashlights each with a different light image.

The emergence of light beams

A beam emerges because of the reflector and lens of the flashlight. Almost all lights we sell are enhanced with a lens made from glass or plastic with a smooth layer. But there are also lenses with a pattern, the Fenix E18Rfor instance. This type of lens is mostly added to smaller models. Because these lights do not have a lot of room and still want to offer a lot of light, the lens was adjusted. As such the light maintains its compact size, leaving you with an extremely broad beam.

The shape of the reflector creates a certain light beam. As soon as you turn the light on, the LED or HID in the light will start to glow. The reflector catches the beams and converts them to the same direction. The beams that do not hit the reflector provide some diffusion. As such you are left with a very broad beam. A larger, deeper reflector catches more rays and ensures much less diffusion. As such the light will provide a focused beam. The type of reflector also influences the beam. An SMO-reflector (Smooth) leaves you with a concentrated to narrow beam. There is also a so-called OP-reflector (Orange peel). This reflector diffuses the beams, leaving you with a broader beam. But there is also an exception. An SMO reflector with a standard shape, like the Fenix UC30, has a combined beam. The SMO reflector takes care of a concentrated beam, but because of the standard shape not all beams hit the reflector leaving you with diffused light. As such you are left with a neutral spot with a broad light image. There is also the combination of an OP reflector with a deeper shape, like with the Fenix TK35 Ultimate Edition. Because of the deeper shape all beams do reach the reflector which means you are left with a focused beam. However, because of the OP reflector these beams are broken. As such you have a clearly present spot with a wide reach.

The light image is key when choosing a flashlight. When we say light image we mean the beam of light as it is disperses from the flashlight. There are three types of beams. Focused beams, broad beam and the combined beam. Officially there is also a fourth beam: convergent. Convergent means that the light beams move towards one point. Convergent, however, is incredibly specific which is why we decided to combine it with the focused beam. There are also lights that are enhanced with a focus system. With it you adjust the distance of the reflector with regards to the LED light. As such you determine whether you will use a broad beam for up close, or a narrow beam for far away.

These three beams all have their own unique qualities. The result is that you will always have the right light for each situation. By choosing the right beam, you are already a long way in finding the perfect light. Do keep in mind that with a focused and combined light beam you can blind yourself or oncoming traffic. If you own a flashlight with a broad beam you don't run that risk.

With a broad beam you can light up large areas at a short distance. Perfect for walks, when camping, for security services, on-site surveillance or photography. For these types of situations you namely don't need a distant beam, but a broader one. As such you can easily light up your surroundings. 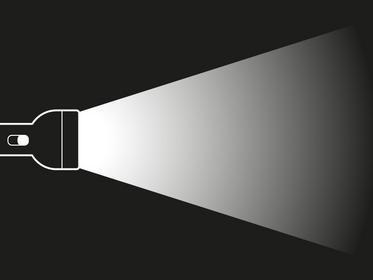 For long distance lighting. With it you purposefully illuminate any object, to make sure you can see the situation from afar. Perfect for search ops, law enforcement, climbing, hunting or when discovering caves. 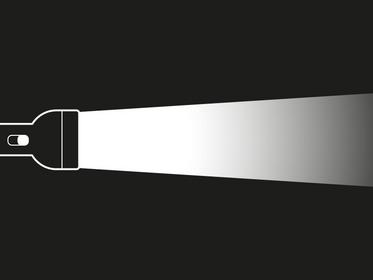 This is a combination of a focused and broad light beam. With it you light up surfaces both far and broad. Perfect if you want to light up as much of your surroundings as possible. Think of rescue ops, but also when trail running or hiking in the mountains these lights will help you out. 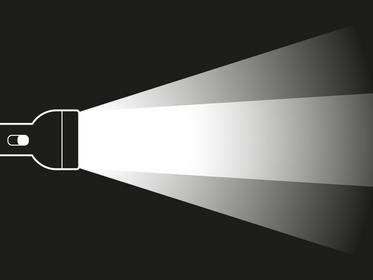 Are you looking for a flashlight for a different purpose? If so use our flashlight selection guide to find out which flashlight will suit you best.

We would like to thank Koen van der Jagt for the photographs.