The LionSteel Gitano GT01 is a remarkable gentleman's knife, designed by Gudy van Poppel. For this design he became inspired by the classic pocket knives from the South of Europe. You can especially spot the shapes of the classic Navaja model. The name 'Gitano' comes from a group of gypsies that belong to the Roma.

The elegant lines of the Gitano are accentuated by subtle details. The double lines in the titanium bolsters, for instance. But also the lines on the pivot make the whole look more special.

Characterizing about the Gitano is that the blade looks a lot bigger than the handle. This is mostly the result of the combination of the high blade and the relatively slim handle. Another special detail is the special slipjoint mechanism that was added. A slipjoint never really locks the blade. But this ‘Cran Forcé’-slipjoint is doing the best it can! Due to the hard transitions between opened-half-stop-closed it takes a lot of effort to close the blade. Just a little more security on a knife that technically doesn't lock when opened.

You open the LionSteel Gitano with two hands. As such it is legal in many places, especially in combination with the slipjoint. The blade is made from Niolox. This is a German type of steel that retains its sharpness well and is also easy to sharpen. 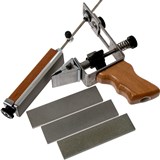 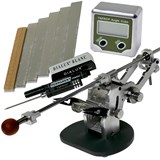