The Victorinox Evolution S101 is a Swiss army knife with 12 tools. The knife is equipped with a locking system so you don't have to be afraid that it will close unexpectedly during use. The handles are ergonomically shaped what makes this knife very nice to use. 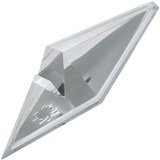