How do you sharpen ice skates?

As soon as temperatures drop below zero people start to think about ice skating. Whether you go out for fun, enjoy figure or speed skating, it is an activity that can be enjoyed by everyone. Let’s say you own a pair of skates and can’t wait to go out to enjoy the first ice of the season. How do you make sure that when you do you will glide over the ice like the pro you are?  That is where Knivesandtools comes in handy. After all, we are experts when it comes to sharpening ice skates. Because yes, you can only impress others at the rink if you have sharp skates. Well, that and perhaps some skills..

When do you need to sharpen ice skates?

You sharpen skates when they are blunt. It is, however, difficult to pinpoint exactly when that will be. This firstly depends – yes, obviously – on how often you use the skates. But which skates you use is also something that contributes to how often you need to sharpen them. Factors that determine how quickly skates need to be sharpened are the type of steel used, the hardness of the steel and the sharpening angle used (the thinner the grind, the faster steel wears out). More about that later.

Most skaters sharpen their skates with sharpening stones. Which stones are best depends on the material of your skates. There are, for instance, stainless steel skates with a hardness of 57 HRC, while there are also (professional) skates on the market made from powder metallurgic steel. This is extremely hard steel, with a hardness of approximately 66 HRC, but this type of steel is also very brittle. In between you also have carbon steel (non-stainless), with a hardness of 60 HRC and High Speed Steel (HSS, 62 HRC). If you own skates with irons made from very hard steel it is wise to use a diamond-coated sharpening stone. Professional skaters often use DMT-sharpening stones, for instance. Ceramic sharpening stones are also great to sharpen hard types of steel (but are not as strong as diamond-coated stones). Do you own stainless steel skates made from steel that is not that hard? If so you could also use other sharpeningstones such as stone made with aluminium oxide and carbide.

Use a sharpening table

We would love to say that it is easier (and cheaper) to secure your skates in a vice but we can’t avoid it: if you want to sharpen your skates properly you will need a sharpening table. In it you hang your skates upside down next to each other, to make sure the base of the irons is pointing up. A sharpening table is enhanced with plates you can place the iron of the skates against, to secure the skates afterwards. Because the plates have the same height on both sides the skates will hang at exactly the same height. As such you cannot only sharpen them at the same time you can also sharpen them evenly. That is why a double vice won’t work, also because a vice doesn’t have room for the shoe of the skates.

When your skates are neatly hanging side by side in the block it is time to start sharpening. Depending on how blunt your skates are you can choose a coarse (grain 100 to 400) or a semi-fine sharpening stone (grain 600 to 1000). If you regularly sharpen your skates you won’t need the first stone that often.

You sharpen both skates at the same time, so you place the sharpening stone on both irons. Make sure that the tips (so the front) of the irons are facing you. As such you make sure you don’t forget to sharpen the back of the irons.

Repeat this diagonal movement until you feel a burr emerge. By moving your nail alongside the edge you can feel if a burr has emerged over the entire length of the blade. You can remove the burr with a small burr stone (like the Skerper Arkansas Pocket Stone) which you place on top of the iron and move forwards and backwards. If you discover any additional blunt spots you repeat the sharpening process with the same sharpening stone until you feel a full burr. When you do you remove the burr with the small stone after which you continue with a sharpening stone with a finer grain. With this stone you repeat the same process until the entire iron is sharp again. Please note: don’t forget to sharpen the ends of your skates by tilting the sharpening stone slightly at the back. Simply sharpening the back of the skates isn’t enough.

Depending on how sharp your skates need to become you can switch to finer and finer stones. The question, however, is if in the end you will still notice the difference. Skates, after all, are not knives you want to use to cut through the ice. We believe that two or three different sharpening stones are enough. It is, however, key you continue to remove the burrs as you sharpen.

You could also choose to polish the iron with the help of some diamond paste on a strop. With it you minimalize the resistance you could run into on the ice. Especially when skating on synthetic ice you will clearly notice the difference. In that case we advise you to use a stropping paddle and not a belt because you move a strop over the skate and not the other way around like with knives. Stropping paddles will offer you more strength than flexible belts.

As you might already know skates do not have completely straight irons. They have a slight curve that will help you to easily make turns. This curve helps you to guide your skate as it were. To sharpen it, however, you need specific equipment: expensive machines most average skating clubs own. We recommend to have this curve restored once or twice a year, depending on how often you go skating. The person restoring your skates can probably also tell you if your way of sharpening is the right one. If, for instance, the curve tends to quickly disappear meaning you have to have it restored five times in one season, it will probably mean that when sharpening  you apply too much pressure and therefore remove too much material.

Finally a couple, perhaps obvious, tips we would love to share. First: don’t walk in your skates on any surface other than ice, preferably also not when they have their protective covers still on. Second: keep your skates dry. Not while you are skating, of course, but immediately after. Dry them with a dry piece of cloth and don’t put them away while they are still wet. Back home it is also best to not store them in a bag or protective cover. You could use so-called ‘soakers’ to prevent the skates from touching. Finally the soles: it is best if you take these out and allow them to dry. Do, however, remember to not place them on a heat source because they could shrink. 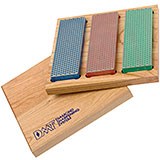 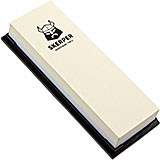 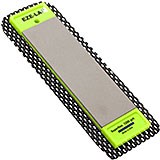 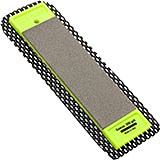 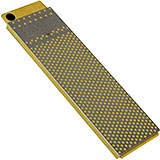 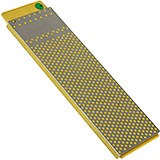